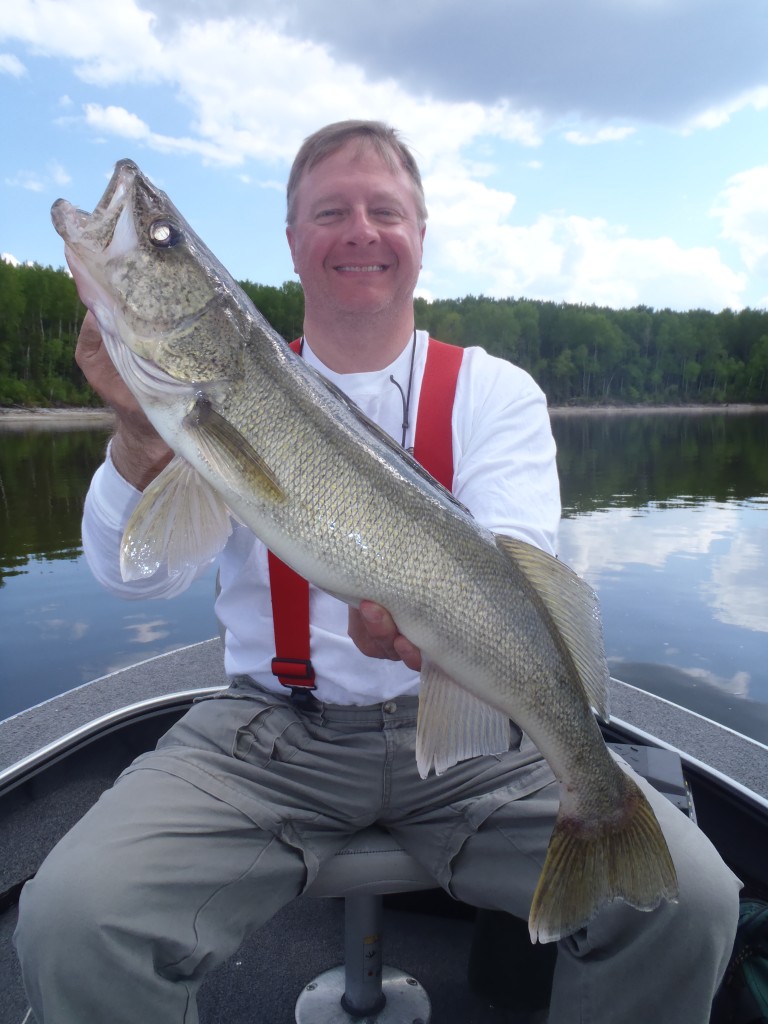 I should probably write two fishing reports for this week, because the first half of the week was so different than the second half. About once every 5 years we have a weather system blow through in May that is so big that it changes the fishing completely. That system came through this week. It began on Saturday and continued through Monday with strong northeast winds gusting to 30, sustained heavy rain, and frigid temps. For those that could stand it, the fishing was OK during the storm, but the post frontal bite was brutal. We had over 3 inches of rain, the lake level shot up ½ a foot, and we nearly lost our road coming in to the lodge. Other than that it was a great week of fishing. And I mean that, because despite the terrible conditions, the guide crew battled through and turned surprisingly good results.

The average fishing report doesn’t mean that much this week but overall guide boats logged an average of 30 walleyes over 18 in. per day. The highest daily total was 64. For the week, we had 34 walleyes over 27 in., including 5 – 28s, and 2 – 29s. Four years ago, I would have called a mid-summer week with 20 over 27 in. a good week. I was actually quite surprised when I crunched the numbers. It didn’t feel that good in my boat. The picture became more clear when I reviewed the photos for the week. It is pretty tough to look happy about the picture of your big walleye with your hood on. It was still a tough May in northwest Ontario. If your guide has you catching fish out of 3 ft. of water on spring spots and catching walleyes out of 30 ft. of water on summer spots on the same day, then he is working hard and you know that the conditions are tough.

We are in full transition for Pike fishing and the numbers reflect the weather conditions. For the week, we had limited effort for pike that resulted in 14 fish over 37 in., including 2 – 39s, and 3 – 40s. When spring comes a month early and then winter returns, you just can’t expect to catch many big pike after a monster cold front and we didn’t.

The big surprise for me is that despite the advanced calendar, the bass have somehow managed to put themselves into a seasonal stall. I flat out told my guests that we should expect to catch bass and we flat out didn’t. They are not shallow, they are not where they were last year, and they did not get the memo that the ice went out mid-April. We caught a few nice bass while walleye fishing, but there is no real bass bite on right now. When the change happens, it will be major and sudden!

The long range forecast is full of sunshine and temps into the 70s. With that, I am expecting a return to a more normal spring, but I am going to try to stop making predictions about fish behavior and movement. They are going to go where they go and based on our history, we are going to find them.