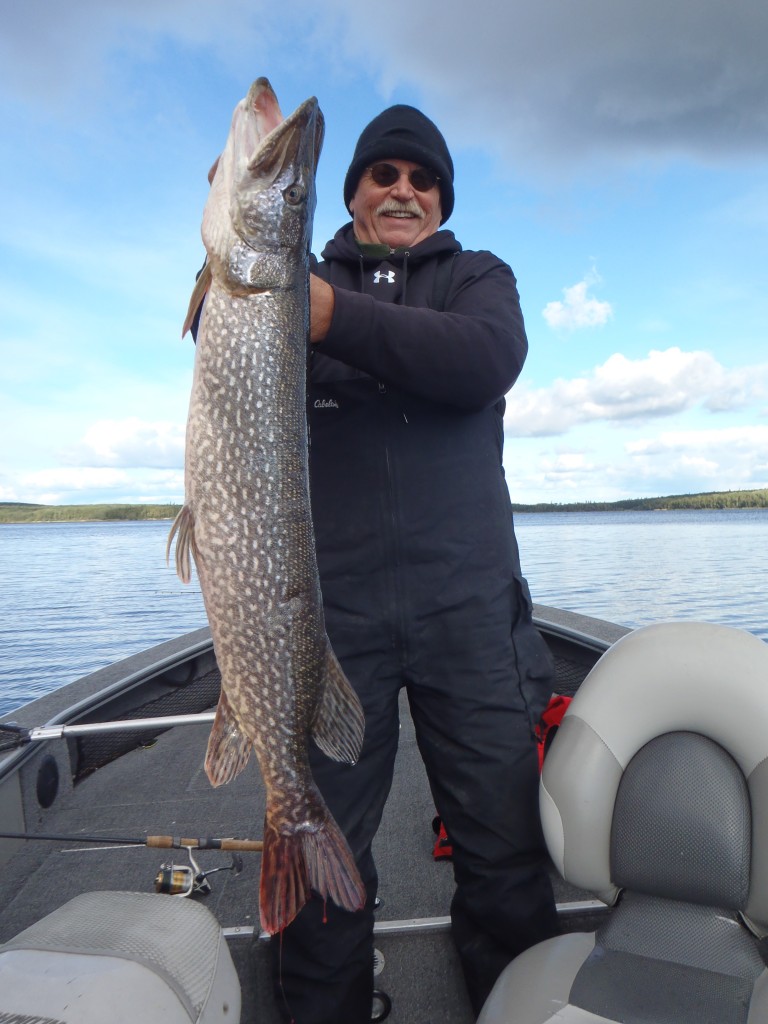 Two weeks ago I stated that “fall has arrived at the lodge”. After this week, I realized that statement was pre-emptive. The official beginning to fall on Lac Seul must include a 2 day blowout, which arrived right on time after the unseasonably hot spell of last week. This week started out with sun and a continuation of the warm weather but by mid-week we saw a serious cold front move in; really the first good one of the year. The worst of it brought hail, sleet, 30 mph winds, and temperatures plummeting into the 30’s. It made for some tough fishing conditions, but the good news is that it brought some nice pike into the shallows. In my opinion, it was just the right push to remind these fish that winter is coming and it is time to get their feed on. For those of you yet to arrive (Tom Larson and Co.) you’ll be happy to know that today was sunny and had a high of 65.

Most of the attention is on pike fishing right now, which leaves the few of us guiding walleye with lots of water and little information to work with at the moment. For the week we saw 5 walleye over 27 inches, all of which came before the front. Today things seemed to be turning around again, and although I did not see a fish over 27, we still managed to put 52 fish in the boat over 18 inches with 14 being between 24 and 26.5 inches. Not bad for 2 days post-front. I take this as a good sign that fall transition is on, and that fish are becoming more organized in both their behaviour and concentration. The primary depths shift back and forth between shallow (10-15) and mid depth (20-25ft). I continue to watch out for both, and presently I have little confidence in the deep bite (30+).

As for the pike fishing, I have to say ‘I told you so’. As soon as that front moved in we saw a sudden increase in the big pike numbers. Between the 2-3 boats targeting pike this week there were 13 pike over 37 inches, including a 39, 2-40s, a 41, and 2-42s. About half of those fish were raised during the heart of the cold front. Pike were primarily targeted by casting baits over standing weed-beds and working grassy bays with deep water nearby. Dave Suggitt (SWWL guide) also had considerable success by ‘tight-line’ trolling over big weed-beds – running spoons close behind the boat right overtop and through the weeds. In his words “you just run your baits about 10-15 ft behind the boat, right through the weeds, and then see pike blow-up right beside the boat on them… that’s what is so awesome about it, that you can see them hit”. Tactics like this can be a nice change of pace after hours of casting, and also cover water in a way that is more effective in certain situations.

We are coming down to the wire here with our last guided day on the 24th. Expect some big pike numbers to come in by the end of next week with the Rosenow group in camp for a good long stay. Keep a-tune and we’ll let you know what we can raise in the next 8 days. Personally, I can’t wait for a monster to be caught, as there is no doubt they are out there and the conditions are only getting better.

That’s it for this week folks. Thanks for reading and for following, and I hope to see you up here soon.