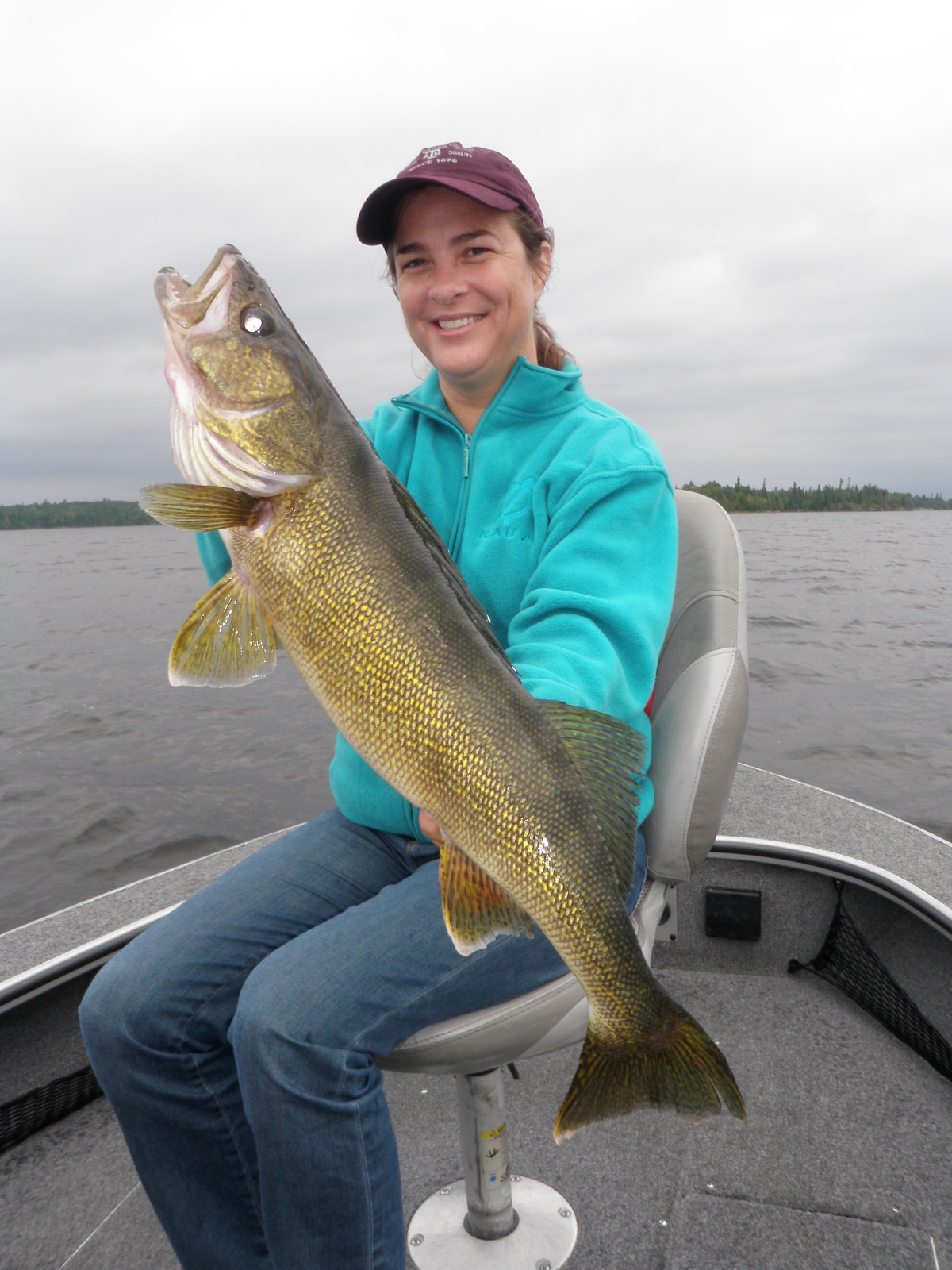 Sunday is my last fishing guiding day for the season. How does the summer go by so fast? Like so many others this year, this past week was overall very good for both big walleyes and volume. Our walleye count did drop off a bit, largely due to volatile weather. We had thunderstorms, heavy rain, fronts, and several days of very high winds. The conditions were tough, but the guides consistently found not only big walleyes, but also an astounding number of 23 – 25 inchers. Chris Fluke personally caught 16 walleyes over 24 in. in one day including 3 over 27 inches.

It was another week with holes in the schedule. There were 59 guided days this week with an average of 9 guides on the water each day. The openings did allow us to have friends and family join us at the lodge to celebrate my parent’s 50th Wedding Anniversary. It was great to see everyone.

The “big jig Gulp Alive” pattern still produced good walleyes this week, but there were more conditions that called for lighter jigs and minnows. Most walleyes were caught between 20 and 35 ft. Both main lake sand and rock were productive. For the week we had 40 walleyes over 27 in., including 3 – 28s, and 2 – 29s. Guide reports averaged just a little over 30 walleyes per boat over 18 in. per day.

There was very limited effort put into pike fishing this week, but that will all change very soon. Nights are cool, surface temps are dropping down into the high 60s, and the weed beds are starting to fall apart. This past week’s high winds tore up some weed beds and there are random pieces floating around in the lake right now. There are still a few spots available for small groups looking to book a trip to chase big pike the first two weeks of Sept.

I am looking forward to seeing a full recap of the final stats for the year. The one trend that I know is going to be prominent is the extraordinary number of 23 – 25 inch walleyes caught during the 2011 season. The other significant change this past summer is the development and refinement of our “Big Jig and Gulp Alive Crazy Legs Jerk Shad” pattern fished at speed down deep. This technique has dramatically improved our search speed and allowed us to effectively study much, much more water than when we relied primarily on electronics to find and dead stick fish on the graph. The bottom line is, the more tools we have and the more comfortable a guide staff is at using them, the easier it is for us to figure out what the fish are doing when they change up their patterns and locations. I credit the consistent number of weeks with 30 or more walleyes over 27 in. across the 2011 season to SWWL guide crew team work and performance. It has been a great fishing year and we look forward to 2012.

I will be chasing muskies with good buddy and Guide Ben Beattie on the East side of Lac Seul on my way home to Iowa. I will be guiding deer hunts for the next 3 months and then we will be right back to SWWL bookings and shows. Until next year…. MW – Gone South!