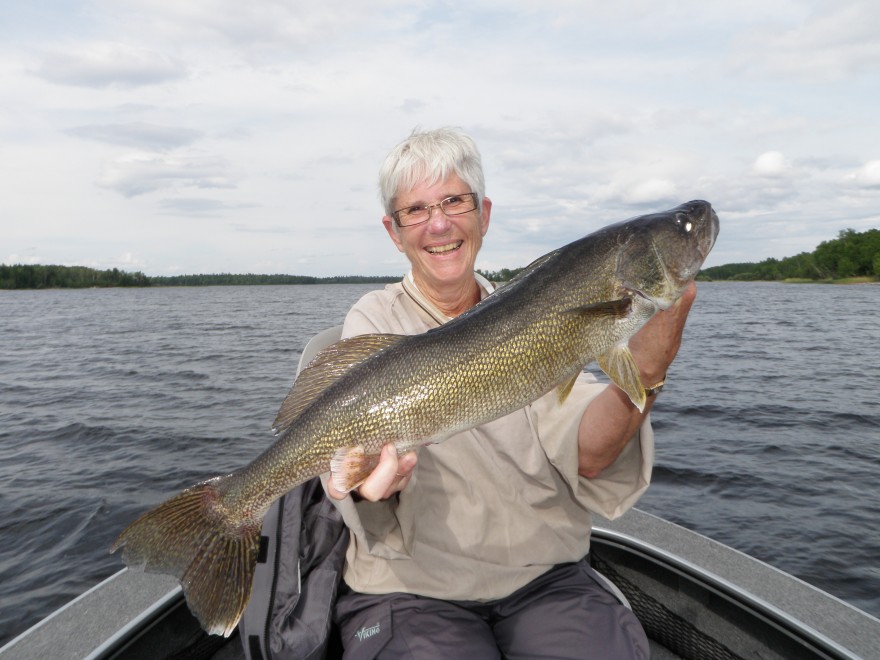 It is officially the beginning of summer on Lac Seul. The cabbage weeds are almost to the top on the main lake. The Bass bite is starting to wind down. And the walleyes are just starting to show up on main lake summer structure. Overall numbers were not quite as strong as the previous 2 weeks, but both of those were off the charts. There were a couple of mediocre fishing days with overcast skies and no wind, but there were also a couple of really bang up days with really hot bites.

Walleye fishing was good this week for both volume and size. The walleyes smacked plastics and Gulp alive some days and other days they didn’t. The guides used the response to plastics as a baseline for how active the fish were on any given day and adjusted their speeds and presentations accordingly. For the week, we had 28 walleyes over 27 in., including 5 – 28s. Volume was very good with guide sheets averaging more than 40 walleyes over 18 in. per boat per day. The weed bite has been good. Transition spots have also been on and surprisingly there have also been good walleyes caught out on main lake deep water sand structure. A couple of the guides caught good fish on bottom bouncers with spinners and Power crawlers, but most production was split between jigs and minnows and Gulp alive minnows or jerk shads.

We didn’t have as many groups chasing bass this week and there are spots that are holding far fewer fish, but the bass bite was still very good. We had 204 bass caught over 17 in., including 66 – 18s, 16 – 19s, and 2 – 20s. There were a couple of flat calm days when topwaters were effective, but most fish were caught on tubes or crayfish style plastics.

Big pike were hot and cold. We had 8 over 37 in,. including 2 – 38s, 1 – 39, 1 – 40 and 2 – 41s. It was a surprise to see some big fish caught in slightly deeper water in what would be considered spring time spots and to see some big fish on main lake structure. Spoons and In-line spinners were top producers.

Take away: It is officially walleye season. We will chase big pike off and on and will finish off the bass season, but It is now summer and every guide knows that to “win” he has to find the big walleye bite.