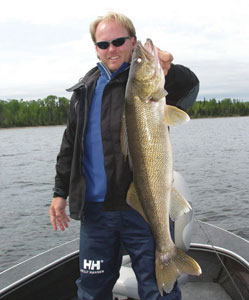 With more and more informed fishing pressure on the water, today’s consistently successful walleye angler is typically a creature of high tech habit. In recent years the world of walleye angling has undergone incredible changes. We now have super lines and super boats, GPS and LCRs, planer boards and snap weights, the options and opportunities are limitless.

With all this technology in hand, It is easy to overlook the fact that at times the super-tech approach may not be the most efficient or effective way to catch walleyes. One of those occasions is early season action on the Canadian Shield. Like most walleye anglers, I’m constantly looking for ways to land more and bigger fish. I still find time to experiment with new tackle and techniques, but over the years I’ve found that early season is a time when a ‘low tech’ approach often puts more walleyes in the boat.

As a fishing guide in Northwest Ontario, I encounter all types of characters whose angling skills run the spectrum from novice to expert. Because every group of anglers is different, I try to keep most of my seasonal presentations simple and effective. Two Seasons ago I was hired for a half day in mid June by a well respected outdoor writer from the upper Midwest. I admit that I felt a bit more pressure to produce than usual, but I decided to work the same simple pattern that had been producing well the previous weeks.

My plan was to head to the wind blown side of a shallow, fertile bay with newly emergent weed growth, drift and pitch 1/4 ounce jigs tipped with a 3 inch twister tail. The day turned out better than I had hoped and we pounded fish. In four hours, three of us caught and released well over 100 walleyes including 3 between 24″-25″ and 2 over 27″ long. During the day, my clients commented on several occasions that they were amazed we were doing so well without using any live bait or modern techniques. I took a little bit of pride in the fact that I had shown the “pros” something a little different about fishing the North.

Later that day, as we rehashed the day’s events over supper, one of my clients said, “Well Mike, that was a good day on the water, but do you think you could catch a walleye in Minnesota?” At first I thought he was kidding me, so I asked him to repeat the question. He said, “I mean you obviously know how to catch Canadian walleyes, but do you really think you could catch Minnesota walleyes?” I couldn’t believe it. I was shocked that he not only questioned my skill, but also by his inference that my prized Canadian walleyes were somehow inferior to their southern cousins. I got over the minor personal affront, but as I thought about it, I realized that part of his premise was correct.

In most respects a walleye is a walleye, but walleyes on the Canadian Shield often don’t act the way a “proper” walleye should. Instead of being the finicky, temperamental, night crawler-sucking southern variety, North country walleyes can at times be more aggressive than European soccer fans. I’ve had a 3 LB walleye slam into a musky sized crankbait with enough force to nearly wrench the rod from my hands. Before I saw the fish, I would have bet money that I was hooked into a pike of at least 15 pounds. I’ve caught modest sized walleyes on everything from giant sized 3 OZ spoons, to Mepps Giant Killers, to 10″ musky jerk baits. I couldn’t count the number of times per week that I “accidentally” catch walleyes on tackle designed for trophy Pike.

“So they act a little different sometimes, so what?” The point is, If you can identify when and where these Shield walleyes will become ultra-aggressive eating machines, you can modify your presentation and catch more and bigger fish. To discover the reason for the occasional behavioral difference between the “northern” and “southern” strain, you have to understand the differences between the two environments that each fish inhabits. I believe that the fish are genetically virtually identical, but it is the difference between the ecosystems that results in the change in attitude. 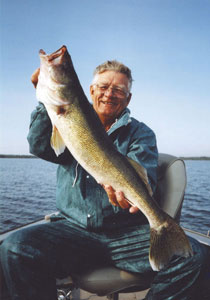 Put simply, life in the North is hard. The growing season is short, forage can be seasonally scarce, and with minimal fishing pressure, there are often more walleyes around competing for a fixed forage base. Age to Length analysis performed by Ministry of Natural Resources biologists indicated that the average 19-20 inch walleye found in Lac Seul was between 10 and 12 years old. A walleye of similar size would require only 5 or 6 years to reach the same length in Minnesota’s famed Mille Lacs.

Like most species, when a walleye has faced lean times and someone rings the dinner bell, he is going to gorge himself like there is no tomorrow. The trick is to know when and where the dinner bell is going to ring. From ice out to the time when shallow bays begin to fill with new weed growth, the most important factor influencing walleye location and behavior is temperature.

I participated in a recent tagging study which revealed that some post spawn walleyes traveled more than 20 miles less than 2 weeks after they had been tagged in a traditional spawning area. Where did they go? They traveled until they found isolated pockets of water that were nearly 60 degrees compared to the main lake which remained in the upper 40’s. Why? Because that was where food could be found. The rapidly warming water effectively jump started the entire food web resulting in a flurry of activity at all levels. More microscopic algae, meant more microscopic crustaceans, more insects, more prey fish and so on until the area became a Sunday brunch buffet fit for a ravenous, post spawn walleye. Someone rang the dinner bell. Once the dinner bell begins to ring, just about any reasonable lure or technique will catch fish. The key now is to find the most efficient approach to put as many fish in the boat as possible.

During the Spring peak, it is not unusual for an angler to bring more than 100 walleyes over the gunwale each day. Unlike patterns found later in the year, early season walleyes are not as likely to school by size, so you have to expect to catch a bunch before you boat a dandy. This is the time to go ‘low tech’. Trolling crankbaits with planer boards or following complex trolling routes with a GPS plotter or even finesse live bait rigging techniques are examples of modern techniques successfully used to catch difficult walleyes, but they are technical and time consuming. These methods will certainly produce walleyes on the shield, but the time spent resetting planer boards, meticulously working a piece of structure, or removing several treble hooks could be spent landing another walleye using a simpler presentation.

Thirty years ago, every successful walleye angler’s tackle box contained some version of the Little Joe Spinner. In the past decade or so, the mighty little Joe has taken a back seat to the more modern techniques of rigging and bottom bouncing. You can fancy it up if you want to, but a 3/8 – 1/2 oz. bead chain sinker and a 2 ft. long pre-snelled spinner harness is a tough combination to beat when the bite is on. Tip the spinner with a minnow, throw the boat into reverse, and troll promising shorelines until you find fish. It worked 30 years ago and it still works today when fish are aggressive.

My personal favorite ‘low tech’ presentation at this time of year is a 1/4-3/8 oz. lead head jig with a brightly colored 3″ or 4″ twister tail. Keep the jig off the bottom, the line tight, and boat speed under Mach 1 and you will catch fish. The simple jig and twister tail is versatile and efficient. The activity level and density of aggressive fish determines the amount of boat movement required. When I know that I am on fish, I’ll use a controlled drift while casting. The jig is then retrieved in a slow swimming fashion. A fast action, high modulus graphite rod will dramatically improve the “feel” you have for the jig and will result in more fish.

At times when my clients are having difficulty detecting bites or when the fish are more scattered, I like to back-troll. I slip the outboard into reverse, pitch out about 40 feet of line, and drag the jigs along. This allows me to cover more water and those that had difficulty discerning a subtle walleye nudge have no problem recognizing a bouncing rod tip after a walleye has hooked itself on a back-trolled jig.

Another variation on this method is a technique often referred to as snap jigging. Instead of back-trolling, the boat moves forward with a bit more speed, usually between 1 and 2 mph. To keep the jig and twister combo near the bottom, typically requires an increase in jig size to 3/8 or occasionally 1/2 OZ depending on depth. As the boat moves forward, the angler sweeps the rod forward parallel to the water surface and then slowly allows the rod tip to return to its original position perpendicular to the boat. This action causes the jig to snap into the upper portion of the water column and then slowly flutter back down. Almost all bites will occur as the jig falls towards the bottom. A thermometer is the best tool to eliminate water early in the year, but snap jigging is an excellent way to further eliminate water, especially when fishing an unfamiliar system.

An important point to make is that these ‘low tech,’ high volume techniques are specifically geared toward those days in the North when conditions are good. Times get lean, even on the Canadian Shield. The day after a severe cold front can decrease the surface temperature of a bay by more than 10 degrees and when that happens, don’t expect the action to be anything like it was before the front. What used to be walleye heaven will suddenly appear to be the dead sea.

Fortunately, not all walleyes do the same thing at the same time. Especially on large bodies of water, a resourceful angler can focus on a different population of fish. Even during the peak of the active bite in the warm shallow bays, some fish will have taken up residence on deeper, main lake structure. These fish are catchable, but far from active. A severe cold front that results in virtual lock jaw for the shallow water population, has virtually no effect on the fish cruising the deeper reefs, bars, and sunken islands of the main lake. They still won’t be aggressive, but heavier jigs tipped with live bait or live bait rigs will save the day and often yield a larger fish.

After a few sunny days, the shallows will warm again and the fish will turn back on. Walleye anglers across North America must be observant and flexible to be consistently successful and the same holds true even on the Shield. As productive as today’s super tech methods can be, there are still occasions when it pays to keep it simple. Walleye anglers who have never experienced the awesome fishing Canada has to offer may be skeptical of dragging meatless jigs or backtrolling spinners the way their Grandfathers did, but these ‘low tech’ methods are quick and efficient and can’t be beat when the dinner bell rings.