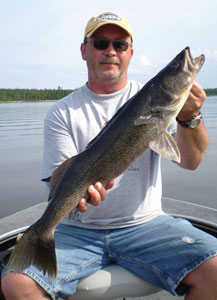 Sure, you will occasionally find the odd big fish living in a smaller lake, but a consistent Canadian Trophy Fishery will always be found on a larger body of water. Specifically, the Diversity of Habitat and the Abundance and Diversity of Forage associated with a big lake are the key factors that result in large numbers of big game fish. To truly thrive, walleyes and northern pike require specific types of habitat that change dramatically throughout the year. In early Spring, warm marshes and rivers serve as the major spawning areas. Large fertile bays become nursery areas for juvenile game fish and feeding grounds for adults in early Summer. And during the Summer and Winter months, main lake basins not only provide a thermal refuge but also serve as home to some of the most important species of prey fish. Life is hard in the North. To grow big, fish need options. They require diverse habitat and an abundance and variety of nutritious forage fish only found in a larger body of water.

For years fisherman visiting Canada were puzzled as to why some lakes were jam packed with small walleyes and virtually no big fish, when another nearby body of water, sometimes even connected, consistently produced a good mix of small and big fish. The cause for the difference in size structure can often be attributed to the presence of a single species of bait fish.

Biologists have determined that one of the key forage required to consistently produce big walleyes on the Canadian shield is the ciscoe. This high fat content bait fish is the “Bacon Double Cheeseburger and Strawberry Shake” of the walleye diet. Without them, walleyes have a difficult time exceeding the 5 LB mark, regardless of how long they live.

Ciscoes like it cool. When water temperatures exceed 70 degrees F for any length of time, they die. Unless, unless they have a cool deep water basin to hang out in. Once again, were back to talking about large, deep lakes. There are occasional exceptions to the rule, but when you are looking for consistent catches of big walleyes, big water is the answer!

Pike are less dependent on a single species to attain maximum size, but big Northerns do have a specific problem in Summer. Like ciscoes, big pike can’t take the heat. Big females have a low surface area to volume ratio and have a difficult time getting rid of excess body heat. When the Summer sun heats up the shallow bays, the big pike seek refuge in the cooler main lake basin for most of the day.

Without deep water or an abundant forage base near deep water, it is difficult for the bigger fish to survive let alone thrive. With a surface area of 560 sq. miles ( 358,290 acres) and nearly 3,000 miles of shoreline, Lac Seul is the 2nd largest inland lake in Ontario, and definitely satisfies all of the structural requirements of a Trophy Canadian Shield Fishery.