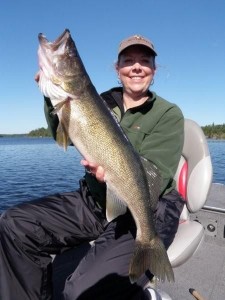 It is always the weather. Especially the early part of the week, the walleye bite was hit hard by unsettled weather. We had 4 nights with moderate to strong thunderstorms that resulted in extremely tough morning bites the following day. Catch rates were lower early in the week, but picked up for both size and volume towards the end.

There was a definite shift in walleye location with the passing of consecutive storm fronts. The shallow bite has shut down and deep water rock and deep water sand main lake structure are now key locations. We did notice a trend for bigger fish from main lake rock although the big fish weren’t as deep as they can be at this time of year. Most were caught between 20 and 30 ft. with only the occasional fish deeper. The main lake deep sand was good, but it took a great deal of sorting through little ones to find the mediums.

One guide boat spent time chasing big pike this week and they managed to put a 41 and a 43.5 in. fish in the boat. Both fish came out of the edge of the cabbage near deep water.