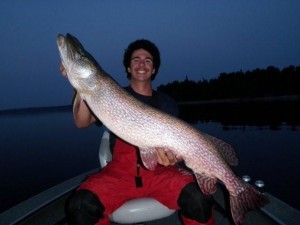 My wife Missy finally had a chance to go out fishing this week with some friends of ours from Minnesota. The gals fished with senior guide Brandon Ouellette and caught and released 3 – 26s and 3 – 27s for the day. “We didn’t catch as many fish as we usually do, but the ones we did catch were nice ones.” And that was also a good synopsis for our week. Volume was surprisingly low, but we caught lots of 22 – 25 in. fish with the normal # of big fish.

Last week’s trend of light winds continued for the first part of this week and there were 2 – 3 days that were much tougher than normal. The weather broke mid week and the bite improved dramatically for a few days. We are still bouncing back and forth between 10 ft. and 30 ft. and there was no consensus as to which produced better. Jigs and minnows were the key, although plastics worked very well for the limited time that the bite was on. The trick was to correctly evaluate the activity level and to adjust speed and presentation accordingly.

For the week, we caught and released 25 walleyes over 27in., including 4 – 28s. Volume was light with guide sheets averaging 25 fish per day over 18 in. The highest daily total was 47. I believe that the numbers issue is based on the fact that the fish are still so spread out.

At some point in time I am going to have to stop being surprised by big pike. This week I still was. In my early guiding years, I worked at a lodge where 37 – 40 in. fish were regular, but we rarely landed bigger fish. For I don’t know how many weeks in a row, we again have caught and released 7 pike over 37 in., but we had 1 – 42, and 2 – 43s. I will allow that we now have a few more guides on staff that really love to chase big gators and that may be part of the explanation.

This is the first year that I can remember that bass season for SWWL was officially over on July 1. They are gone. We caught a few down deep and we caught a few pike fishing , but the numbers and size were not worth talking about.

My wife Missy – “We caught big walleyes today and I forgot how much fun that was – the girls and I had a blast with Brandon!”