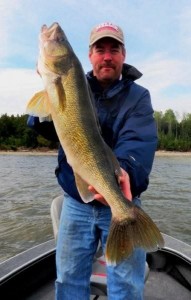 The week started out hot and ended a little bit more typical of the last week of May. Fishing results continue to be very good with better than expected numbers along with many big fish every day. We were into the upper 80’s earlier this week, but thunderstorms and rain the last few days have cooled air temps down to normal levels. The rain is welcome as we were beginning to see water levels a little lower than normal.

We found walleyes in both “spring” and “transition” spots this week, but strong numbers were definitely focused in the “spring” spots. The “transition” areas did produce some of the bigger fish. Pitching jigs and plastics shallow did produce some fish, but the vast majority of the bite this week came from the 6 – 12 ft. zone with most of the big fish in 10 – 12ft. Jigs 1/8 to ¼ oz. tipped with minnows caught the most walleyes this week.

Volume for the week was very good with guides reporting an average of 30 walleyes over 18 in. per boat each day. The highest daily total was 61. It was a great week for big fish with 38 walleyes over 27 in., including 9 – 28s, and a 30.25 inch giant caught by Mike Bianchet.

The bass are just getting established in their spring areas as water temps creep into the low to mid 60s. There wasn’t much effort made to target bass this week, but there were still 33 over 17 in., including 6 over 18. Most were caught with jigs and minnows or jigs and twisters pitching up shallow for walleyes.

A conversation at lunch between an anonymous senior guide and myself –

MW – “How was it out there this morning?”

MW – “You have got to be kidding me … Say that again and listen to yourself!”

Senior Guide – “I know, I know, it sounds spoiled… But it really was a lot slower than yesterday!”