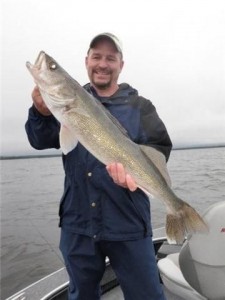 Summer weather finally arrived with some sunshine, heat, humidity, and thunder storms instead of all day rain. You couldn’t call the conditions “settled,” but it was a dramatic change from the rest of year. The walleyes responded positively to the conditions for the most part, but there are still groups of fish scattered across all depth zones.

There were still times during the week when some bites were tough. The deeper water fish were more temperamental than the shallow ones. Versatility was always the key to consistent success. When the deep water walleyes were inactive, the options were to downsize to 1/8 oz jigs and fish very slowly or pack up and spot check other areas, including shallow main lake weedbeds. Not all cabbage beds were holding fish. The best ones were exposed to main lake current and were near deeper main lake basins.

There are many traditional summer areas that have just not produced this year. Many spots that would have had “A” ratings during previous seasons are virtually empty. Not just no big fish, but no fish.

Big minnows on ¼ oz jigs were the preferred presentation. There were a couple of fish turned with bouncers and leeches and a few nice fish caught on Gulp Alive minnows, but that accounted for about 2% of the week’s catch.

There were a couple of random bass and big pike caught, but they weren’t targeted or really worth talking about.

A guest on departure – “Missy, we read Mike’s fishing reports all summer… and he had us really worried…and then we get up here and the weather is good and the fishing is great, we just couldn’t be happier!”

My Wife – “Well the weather did just break, but I will agree that the boys do set pretty high standards, and Mike is a little spoiled and can be overly critical…”

I wasn’t there, but she told me she winked.