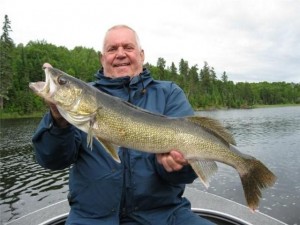 Déjà vu All Over Again

The weather was consistently inconsistent all week. We experienced cool conditions, overcast skies, and off and on showers every day for the past week. There were a few sunny breaks in between and we did see surface temps creep up into the lower 60s, but the lake feels like Fall.

The weather kept the walleyes scattered and definitely slowed our volume down, but the numbers for big fish were good. For the week, we had 30 walleyes over 27 in., including 5 – 28s, and 2-29s. Guide sheets averaged 25 walleyes over 18 in. per day and the highest daily total was 59.

Guides continued to bounce back and forth between main lake deep water sand (20-35ft.) and shallow to mid depth (10 – 16ft.) sand in front of weed beds. Main lake summer rock patterns have not been effective. Faster presentations with big jigs and plastics worked occasionally in shallow water, but the deep water fish preferred slower and smaller presentations with lighter jigs (mostly 1/4oz.). It was common to catch a few fish shallow – move, catch a few fish deep-move, and repeat. The biggest guiding challenge was to get your guests accustomed to the extreme changes in speed required for the switch from deep to shallow.

There were a few boats that chased pike this week with very limited success for big fish. There was one 40 boated, but it was caught on a jig out of 30 ft. It was the same story for bass. There were a few caught on spinners and topwater, but most were incidental catch.

With lots of things on the go, I was a day late writing the week’s report and can give you a preview for the first week of Aug. – Blowout! It will be a brand new game tomorrow after another Massive weather system hit us today, with high winds, rain, and cold air temps. What else would you expect for anti-summer 2009?

The Kicker: After moving my boat from a shallow water weed bite and picking up a few active walleyes on plastics, I changed location and geared my guests down for a slower deep water bite. I showed my guests walleyes on the graph raising up off the bottom to “check out” our jigs and then refusing them.

My guest: “I just can’t believe that! We aren’t more than 200 yds. away from that last spot where those fish were snapping and these walleyes won’t give us the time of day….”