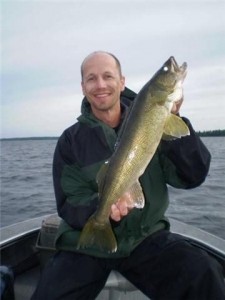 The weather is still cool and variable and nothing even closely resembling summer, but in Canadian terms, it wasn’t too bad. Mornings were often mid 40s to 50 and daytime highs were between mid 60 to 70, but there was enough clouds and wind to prevent surface temps from warming significantly. In my guiding career, I cannot remember a time when main lake temps were this cold this late in July. The main lake basins began the week in the high 50s and are still barely at 60. Cabbage weeds are not to the surface, the mayfly hatch is late, and water temps that are uniform throughout the depths still have walleyes evenly distributed from 10 – 30 ft. The depth question is a daily challenge for all of our guides, but we have become very comfortable spot checking different areas and depths quickly to figure out the pattern for the day.

For the week, we had 29 walleyes over 27 in., including 5-28s, and 2-29s. Guide sheets averaged 35 walleyes over 18 in. per day and the highest daily total was 57. The big walleyes were evenly split between aggressive, fast shallow presentations and deep and slow. When the big fish were shallow, Gulp Alive plastics on big jigs would let you know quickly how aggressive they were. We used fast swimming snap retrieves with 3/8 oz. jigs with bait casting gear on sand breaks in 8 – 14 ft. to find active fish. I had a 28 about jerk the rod out of my hand, it hit so hard. Often the active phase of the bite did not last that long, but we would then gear down to smaller lighter presentations to pick up additional fish from the hot spots.

For every big fish caught shallow, there was at least one caught off main lake mega-sand structures on the 18 – 24 ft. crest that broke off into deep water. Most of these fish were caught with jig and minnow combos in ¼ – 3/8 oz. Although, some guides experimented with thumping big jigs deep with Gulp Alive plastics to cover ground quickly. Results were mixed, but there were days where the fast presentation down deep produced more big fish than the slow drag.

Flexibility and versatility were the key. I was surprised almost every night at round table at the number of different types of areas, depths, and presentations that resulted in big fish. The new normal is fish it all, every day.

The cold water temps did stretch out our bass season. We didn’t spend a great deal of time chasing them, but we did release 52 bass over 17in., including 11-18s, and 2-19s. Tubes and top water were the top producers. On sunny days with no wind, topwater was the best bet. Big tubes were always the answer the rest of the time.

We stumbled into a few big pike this week, but it wasn’t on purpose, or worth mentioning the details.