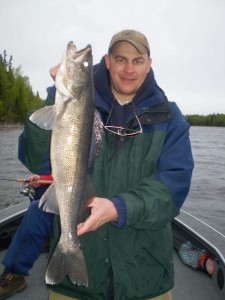 The times they are a changin.” The week began with more of the same; cold, overcast, rainy conditions that were miserable to fish and tough for production. By midweek, main lake temps were 47 degrees and backwater areas had fallen to 51. The result was that fish began to scatter. With no thermal advantage for baitfish, you were just as likely to find walleyes in 18 ft. as you were to find them in 8 ft. The weather broke yesterday and we finally had the first partially sunny and warm days that we have had in quite some time. Now in the Disney version of the fishing report, we would catch fish happily ever after. Instead, it was like someone hit the Puree button on the blender. There were just a couple of fish everywhere and instead of putting a pattern together and copying it, you just kept moving and trying different ideas until the day ended.

At tonight’s nightly round table guide meeting; guys caught May style walleyes on husky jerks in the back of marshy bays, they caught typical early June walleyes on transition spots, and they caught some fish in 20 ft. off main lake points. The only way to win was to aggressively spot check many different types of areas with very different types of presentations. Most fish were caught early this week with standard jig and minnow combos in 8 – 15 ft., but later in the week you had to add crankbaits and pitching jigs into the shallows to be consistently successful.

Production improved with every hour of sunshine and by the end of the week we were averaging 30 walleyes over 18 in. per day logged on the guide sheets. The highest daily total was 62. For the week we had 20 walleyes over 27 in., including 4 – 28s, and 1 – 29.

With the variable and cool weather, we pretty much ignored the pike this week, but the guys that were working the early season husky jerk bite in the back bays turned 1 – 40 and 1 – 41 as incidental catch while walleye fishing.

The bass bite kicked into high gear with the first warm weather. Volume was high, but the best areas were mixed rock near water that was 10 – 20 ft. deep. The traditional shallow spring bass spots held a few fish but not the big ones. For the week we had 81 bass over 17 in., including 14 – 18s and 4 – 19s. Cranks, plastics, and spinnerbaits all had their good days, but nothing was more consistent than the other.

The Kicker: “Daddy, is it going to be another yucky day? I am so tired of yucky days!” Brooke – age 4.