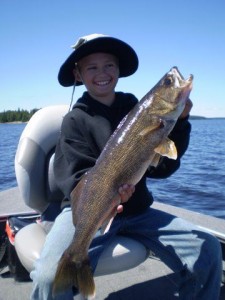 We got some Summer weather late, walleyes didn’t get the memo, stayed shallow!:

It was a week of warm sunshine and a pleasant week to be on the water. Water levels continued to drop and some weed beds are beginning to show the first signs of decay. Walleye volume picked up but continued to be a shallower than normal bite. The “normal” big fish summer spots remained empty and we kept trying them on a regular basis. Main lake sand was the key this week for walleyes and hot spots ranged in depth from 10 down to 20 with a little bit of action down deeper. There was a bite on the deep edge of many wind blown weed beds, but it was inconsistent, hot one day and slower the next. As is so often the case, you had to be versatile to win.

Most walleyes were caught using 1/4 oz. jigs and minnows, but one pattern was a surprise. When walleyes moved very shallow onto wind blown sand flats, plastics worked aggressively would select for some bigger fish. It felt like those fish moved up with the sole purpose of feeding, so there was no need to fuss around moving slow. We worked 4 “ Gulp alive minnows on 3/8 oz. jigs. Long casts with popping retrieves with only the occasional bang on the bottom, resulted in super aggressive strikes and powerful fights. We topped out with 27s, but it was a fun change of pace.

Overall walleye volume was strong this week with daily guides sheets averaging 40 walleyes over 18 in. per boat. The highest daily total was 69. For the week we had 12 walleyes over 27, including 2 – 28s, a 29, and a 29.5. Father and son team Dave and Hunter Nielsen caught the 2 big ones on the same day.