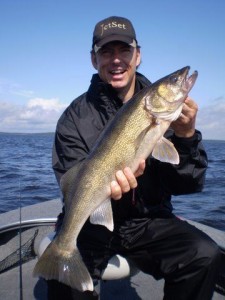 Is it really almost summer?, falling water levels, and walleyes on the move;

It has yet to make it over 85 degrees F. on the South shore of Lac Seul this summer, but it did begin to feel a bit more like summer this past week. The weed beds have reached the surface all over the lake and many stands of cabbage are 12 – 14 ft. tall. There really weren’t many weather extremes this week and water levels are still gradually going down. From the fisherman’s perspective it looks like conditions should be trending toward a more typical summer bite, but evidently the walleyes don’t quite see it that way.

During the past week, “the bite of the day” occurred in a different type of area every single day. Deeper main lake rock produced well early in the week and tapered off towards the end. Mega-sand structures, held some big walleyes deep early in the week and good volume later in the week on the shallower top edges of the breaks in 18 – 22 ft. On Thurs. and Fri. the deep water structure bite died, and very active walleyes were found in patches on sand flats with current in 12 – 18 ft. In front of specific weedbeds, some of those fish were so active that 3/8 oz jigs with 4” gulp minnows were the preferred presentation. At the same time, there were some big walleyes caught on main lake sand “dead sticking” 1/4 – 1/8 oz. jigs in water as deep as 35 ft. We are aggressively searching different water every day in hopes of finding a consistent pattern. So far, the pattern this year is that there is no pattern.

Volume was patchy this week, but overall was good with the guide sheets averaging 35 walleyes over 18 in. per boat per day. The highest daily total was 60. The big fish bite is improving. For the week we had 22 walleyes over 27 in., including 5 – 28s. What those numbers don’t show is the quality of some of the fish caught. As we have been spending more and more time working areas near the deepest main lake basins, we are catching some extremely fat fish. Two of the 28s this week would have weighed well over 9 pounds and there were numerous reports of 25s – 27s that were pushing the 6 – 8 lb. mark respectively (usually a 25 in. is 5, 26 is 6, etc..)

There was an incidental 38 in. pike caught this week, but I don’t expect any real effort chasing pike until the water begins too cool.

We did have a few unexpected cancellations for Aug. and Sept., anyone interested should feel free to give us a call.